Learn to fingerspell in ASL! (Refresh the page to start animation.)

Ski Pics and a Bennyism

We went skiing on Saturday.  Ben is definitely my son, meaning that he is fearful, anxious, and risk-averse.  So ski progress has been a little slow.  This time we tried out the ski harness, or as Ben calls it the HNL (for Harness 'n Leash).  This keeps him from building up too much speed, and that gave him just the extra bit of confidence he needed -- very soon he was skiing and turning on his own.  When Neil and I were cold and tired and wanted to quit for the day, Ben announced that he never wanted to stop skiing.  Here's a short video -- I'm sorry it's so blurry at the beginning.  And here are cute pictures of Neil and Ben riding on the ski lift and cuddling in the lodge during lunch. 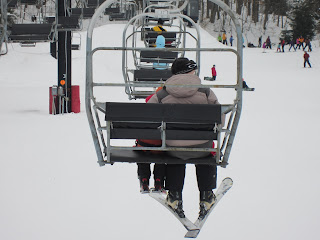 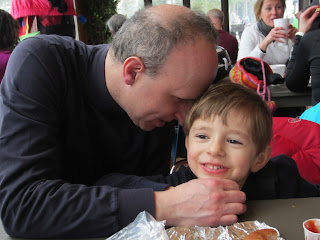 Yesterday, Ben decided to be an archaeologist for a day.  (His primary career goal is to be a librarian at the New York Public Library, because he likes the lions out front.)  He dug up a lot of bones (blocks), reconstructed the skeletons, and then wrote up science reports on them.  Here he is preparing one of the reports. 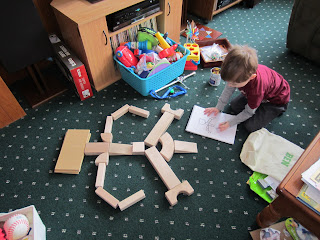 Here are two of his finished reports. 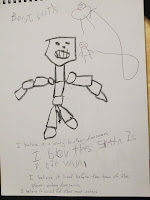 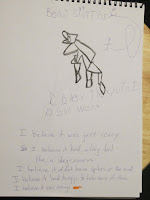 He put our Company Name (Ben, J Scientists) and logo (a person with an arrow leading to another person, signifying going back in time) at the top of each report.  His inventive spelling is pretty clever -- e.g. "I blev ths slatn is a big wun," for "I believe this skeleton is a big one."  He dictated some of his other observations to me.

Ben has gotten into chess lately.  Okay, so he's a little obsessed.  It all started with the chess board at his piano teacher's house.  These days one of his favorite activities is to try to solve chess problems on the family tablet.  When I picked him up from school today, he was demonstrating various chess moves on the tile floor in the hallway.  Today he noted, "If the game were called check, then we would put the king into chess!"  (That is, ain't it strange that in chess we put the king into check?)
Posted by Julia at 7:10 PM 232 comments:

Ben's recent issue of Ranger Rick Magazine was devoted to the rhinoceros, and featured step-by-step instructions for drawing a rhino.  Ben kinda went to town on that, with the following result: 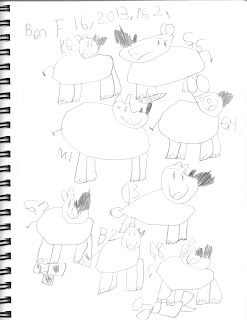 He drew an entire extended family, and then he helpfully labeled them for easy identification.  M1 was the first one he drew, and it most closely resembles the Ranger Rick version.  They became progressively more abstract with each incarnation.  M1 is the Mom.  B2 is the Baby, and was drawn second.  D3 (just to the upper right of B2 -- the "D" is written backwards) is the Dad.  G4 is Grandma, and G5 is Grandpa -- he's holding a book under his front toes.  Ben was very specific about this; it's the thousand page book that my father-in-law was trying to read while we were visiting last Thanksgiving, despite Ben's nefarious attempts to steal his bookmark.  K6 in the upper left is the Kid; he decided that B2 needed an elder sibling.  G7 is Grammy, standing on a box of crayons, a box of pens, and a piece of paper with a drawing on it.  G8 is Grampy, complete with saw, nail, and screwdriver.

Ben has advocated many times for a baby sister or brother, and finally was forced to take matters into his own hands.  When a family friend was pregnant, we explained that she had a baby in her tummy, and eventually the baby came out.  After that Ben would routinely announce that he had another baby in his tummy.  He has given birth at least five or six times now, each time producing a child that he described as his brother or sister.  They grew up quickly.  His sister Emily is now 19 and lives in California, and occasionally comes for a visit. 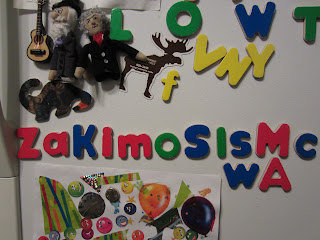 No, it's not a trendy little bistro downtown.  See, Ben has gotten seriously into the Madagascar movies.  (And Superhero Squad, but that's another post.)  His favorite is Mad 3, and his favorite character is the villain Chantal Dubois, Monte Carlo's most determined and pain-tolerant animal control officer.  And his favorite scene is this one.  He sings this song all.the.time.  In fact, if he's answering "no" to something, he usually ends up segueing into the song.  I can only imagine what his teacher thinks of this.  He does a pretty good job with the French.  He sang it over the phone to Neil's parents, and my mother-in-law recognized it.  One of these days we'll get it on video.  Anyway, he arranged his refrigerator magnet letters as above, and explained that this was the last line in the song -- "Zakimos is m cwa."  Or, in the original French, "Ca commence avec toi."  (He misheard the last word as something like "soi".)

In other news ... oh, yeah, there's that whole "I haven't blogged since WHEN????" and the impossibility of trying to get caught up again.  Ben's birthday morphed into Halloween, which then crashed quickly into Thanksgiving, a totally insane end to the semester, and a trip to Wisconsin for the holidays.  The weather's been weird all over.  Ben is doing well in school, and marvelously on the piano.  We've suddenly found ourselves in a bizarrely compliant and cooperative phase.  Yes, he can still be the Pushback King, and if he weren't I'd wonder who swapped out my kid, but out of nowhere, he's starting to be ... reasonable, almost.  In an age-appropriate way.  It won't last, of course, but we're enjoying it for now.

We've been dealing with Ear Mold Grief for about eighteen months now.  He had always been a pretty good hearing aid wearer, but right about then he developed a wax build-up which caused him pain, and we had to go without the aid until we got that cleared out.  I don't think the aid was any less comfortable after that than it had been before, but now it was on his radar screen.  And he started pushing at it all the time.  Push, push, push -- until he gets an abrasion in his ear, and then we have to go without the aid again until it heals.  I think it's part discomfort (or at least greater awareness of the aid), and part nervous habit.  He'll go through phases of pushing at it more than usual, probably due to stress.  We have gone through so many different ear molds, always hoping that the new one will solve the problem -- and at $60 a mold, not to mention the two hour round trip to the audiologist, this was getting a little tedious.  So finally, last Monday, we had a special audiology appointment devoted just to this one issue, and we picked out a (radically) different style of mold -- an in-the-canal mold, with nothing in his outer ear.  Not usually used by children, as it's harder to get in and out, but we're going to give it a try.  Maybe having something that feels this different will reboot his system, and break the habit of pushing at it.  Anyway, there'll be a lot less to push at.

And Ben and I are starting weekly ASL lessons!!!  I'll let you know how those shape up.
Posted by Julia at 7:19 PM 5 comments:

How they do it up north

took 5-year old Ben to my intro logic class today since his school was closed (wimps). We were doing a proof and needed to derive a contradiction, and two were easily available, (F and not F) and (G and not G). I asked the class which one they preferred. Ben said "F and not G." I told him that was not a contradiction. "It is in Canada," he said.

In other news, Ben performed in his second piano recital this evening!  In full costume!  He did beautifully.  Video to follow, as soon as I figure out how to edit video.
Posted by Julia at 5:47 PM 3 comments:

Here are some more pictures from when my parents were here for Ben's birthday.  (In fact, all four of Ben's grandparents were here -- lucky kid!)  We drove over to Lake Erie right before sunset and took in the views and the gentle breezes.  (That was before Sandy swept her ominous arms across the land -- right now we're being pelted by a driving rain, but it could be a lot worse.)


Okay, so The Costume needs an explanation.  Several months ago Ben decided that he wanted to be Bugs Bunny for Halloween.  I heartily approved.  Not only do I like Bugs, but I figured we could get a costume online -- just whip out a credit card and we're done.  Then, about three weeks ago, Ben decided that he wanted to be ... The Sky.  Yes, the sky.  All of a sudden he's Nature Boy.  So, after a momentary panic, I said, "Okay, honey, that's a very creative idea.  What exactly do you have in mind?"  After a bit of back and forth, and with very little guidance from me, Ben came up with an elaborate design.  The pants would be the Day Sky, and the shirt would be the Night Sky.  There should be trees growing out of his feet, plus a rainbow going behind the sun.  I'm thinking a sweat suit adorned with felt.  (One small hitch is that nobody makes sky blue pants for boys.  We managed to find this pair in the girls department.)  I'm also thinking glue.  Because I just don't have time for a big sewing project.  Well, turns out that there's no glue short of Super Glue (which I figured was inappropriate) that sticks felt to fleece.  Apparently, from the felt's perspective, the primary role of glue is as a stiffening agent.  Very long story short, out comes the sewing machine, and there goes most of my weekend.  My perfectionist tendencies were constantly thwarted, and the result is not quite the Martha Stewart masterpiece I'd originally envisioned.  But the overall effect is pretty impressive, and Ben is delighted.  He made the cloud hat.  There is also "fog" in the form of a fringe of greyish blue yarn that hangs down from his arms, but we haven't put that on yet because it involves safety pins and Ben is a little freaked out by that.

Of course, it's looking more and more like Halloween is going to be washed out by Sandy this year.  We'll see.  If that's the worst of the storm damage, let's all count ourselves lucky.

I spent much of this past weekend making Ben's Halloween costume.  But that's not what this blog post is about.  (Once I manage to get Ben to wear the darn thing, I'll post a pic.)  There was quite a lot of felt left over.  So Ben was urging Neil to use this to make his own costume.  Neil said that he could put a giant felt "N" on his shirt and go as Super Neil.  Ben liked this idea, but suggested that instead he go as Robert.  Robert?  Yes, Robert.  Another superhero, named Robert.  Y'know -- he doesn't fly, like Superman, but he's a superhero.  Named Robert.

For whatever reason, Ben doesn't get much superhero exposure at home, but I'm sure he overhead talk of Batman and Robin at school.  Or slightly misheard, as the case may be.

There should be a superhero named Robert.  I wonder what his special power would be.
Posted by Julia at 11:31 AM 5 comments:

I'm going to try to make up for a total lack of recent blog posts by just plastering pictures all over the place.  Between work and preparing for Ben's birthday (the kid just turned five!!!), I've been a leetle busy lately.